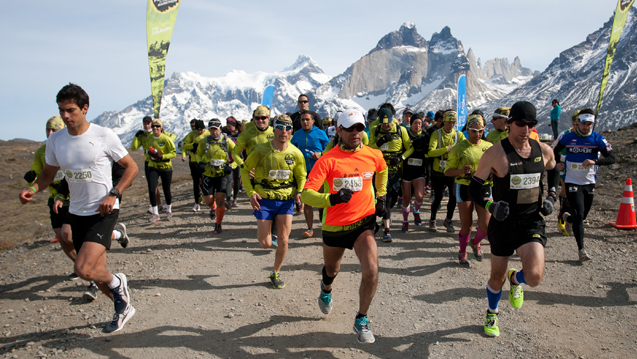 51 year old Stefaan Engels, from Ghent in Belgium, who was dubbed ‘Marathon Man’ after becoming the first person to complete 365 marathons in 365 days, will be joining an international field of runners at the inaugural Patagonian International Marathon, which will take place in the Torres del Paine National Park on September 23rd, 2012.

Mr Engels, who is already a Guinness record holder for being the first person to complete 20 Ironman length triathlons in a year, covered 15,401 km (9,569 miles) during his epic year of running and described it as less like ‘a year of torture…. more like a regular job.’ After running in seven countries and participating in 12 official marathons, this will be his first race in South America. His accomplishment is even more remarkable considering that he was diagnosed with asthma when quite young and advised to avoid physical activity.

Stefaan Engeles said ‘I want to inspire people by showing that if I could run a marathon a day for an entire year, that anyone could run or bike a little each day. Now, I am excited to run in and for Patagonia. Participating in the inaugural Patagonian International Marathon is inspiring, as this marathon promises to be very different from the big city marathons. Running in Chile will be a new life-experience for me.’

The Patagonian International Marathon is organized by NIGSA (Nómadas International Group SA) and Race Founder and Director Stjepan Pavicic stated ‘We’re very pleased that Stefaan will join us in September. We believe this is a unique opportunity, not only to drive forward conservation efforts in Patagonia, but also to inspire people to change the way they see themselves and the world around them’.

Mr Engels will join other running celebrities in supporting the “Reforestemos Patagonia” project which aims to plant a million trees in areas which have become deforested. This is particularly significant for the location of the Patagonian International Marathon in the Torres del Paine National Park, a UNESCO Biosphere reserve that lost 170,000 km2 of forest in a devastating wildfire in December 2011.

Participants in the Patagonian International Marathon will be invited to donate 2000 CLP ($4 USD), which will pay for the planting and ongoing care of one of three native species of tree in vulnerable areas. For race organizers NIGSA, the project has a natural symbiosis with their other key conservation initiative, The Huemul Conservation Project. The Huemul, also called the Andean deer, is under threat of extinction, primarily due to loss of forest habitat. The current population estimate is that less than 2,000 animals are left throughout the Andes.

About NIGSA: NIGSA (Nómadas International Group SA) are based in Punta Arenas, Chile. With over 25 years experience in the region, they are internationally renowned as the organizers of the Patagonian Expedition Race, often referred to as ‘The Last Wild Race’. In addition to its race organization expertise, NIGSA are the leading destination management company in Chilean Patagonia and have worked in cooperation with the Wildlife Conservation Society on eco-tourism projects in the Karukinka Natural Reserve.

About the Marathon: The Patagonian International Marathon will take place on September 23rd, 2012 in the Torres del Paine National Park, a UNESCO Biosphere Reserve since 1978. Alongside the full classic marathon distance (42km/26.2miles) there will be a half-marathon (21km/13.1miles) and 10km race using the same course. The marathon will not only focus attention on Patagonia as a tourist destination, but will also bring direct benefits to conservation in the National Park through its association with the Reforestemos Patagonia project, which aims to plant a million trees in areas which have become deforested.

Stefaan Engles is 51 and from Ghent in Belgium. He enjoys life and is fanatical about sports. A former exhibition designer, he went on to become a coach and sports professional behind a number of major sports activity promotions in Belgium and he is always putting his own body to the test by setting records, getting media attention and by being an inspiration and motivation to other people. The first time was in 2008, when he completed 20 long-distance triathlons and made the Guinness Book of Records and again in 2010 by running a marathon every day.

In May 2011, Stefaan Engels contribution to sports in Ghent was recognised when he was honoured with the title ‘Sports Ambassador of the City of Ghent’. 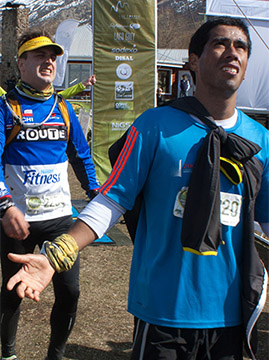